For the first installment of our People of Atypon series, we sat down with Atypon’s General Manager, Gordon Tibbitts.

When Gordon Tibbitts was nine years old, his dad sat him down to make an important choice about his future. “You can stay here and do fourth grade,” he said, “or you can spend the year doing fieldwork with me and do school by correspondence.” 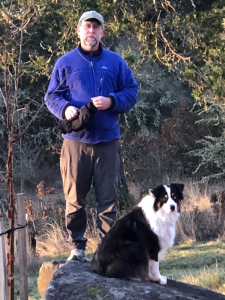 Gordon’s father worked for USAID, and the fieldwork in question was a project mapping water sources on the border of Nepal and India. Gordon picked option #2, and spent that year driving tractors, digging ditches, and hunting to feed the members of the drilling crew.

It was a memorable year in a childhood spent living and working in communities across North Africa, Nepal, and India, which also included kite-fighting championships in Kathmandu—where he earned the title “King of the Sky”—and an evening encounter with two unusually large green eyes that turned out to be a 14-foot tiger.

“It gives you a different perspective on the world,” Gordon says of the 16 years his family spent living outside the US, “because you were raised by the world.”

Back in the United States, Gordon began his career as a technologist, working for publishing companies as a university student and after getting his computer science degree.

“Back when I started,” he says, “I quickly accelerated from being a programmer to an analyst to a manager to growing things to building things, and I built literally everything, from search engines to full-text editors.”

There were no computer monitors then, no WYSIWYG word processors, and in the publishing world, a person who both understood the emerging technologies and worked well with people was perfectly placed to advance quickly from writing code to managing people—and publishing companies—with the dawn of digital publishing. This same period also saw Gordon earning his MBA from the University of Oregon, as well as the arrival of his two children.

After long stints at information and publishing companies including DKD, American Health Consultants subsidiaries of Medstat, a division of Thomson, Gordon was hired as CEO of Blackwell Publishing in 1999. From Blackwell he went to Berkeley Electronic Press, and from there, in 2010, to Atypon.

It’s perhaps a less adventurous career than mapping water sources in the jungle, but it’s offered opportunities to contribute to the world’s collective knowledge base on a far bigger scale.

While he’s happily spent his career in publishing, always tackling “the next large challenge,” Gordon is most proud of his work in foundational cross-industry initiatives, including building out infrastructure for not-for-profits and charities. For example, he was a co-founder of CLOCKSS, the long-term dark-archiving organization for our industry—whose participants now include 300 libraries and 400 publishers—and played a key role in persuading publishers to hand over their content for archiving. “There are websites all around the world keeping the data live and archived, so I think that’s a really amazing accomplishment,” he says. “A lot of people worked on it, and I was right there at the beginning.”

And he continues to seek out that kind of opportunity: “What gets me out of bed in the morning is, how can we do something that helps humanity?”

That’s what he aims to do at Atypon, focusing on all the ways we can help researchers, societies, and publishers advance and disseminate new knowledge.

We asked Gordon what one piece of advice he’s found most valuable, and his answer wasn’t a surprise: “Hire really good people, and then let them do their job.”

An organization can’t expand, grow, and be successful, he argues, without adopting that principle. And it goes the other way, too: “Work in organizations that believe in that, and you’ll be happier in your career. Trust the people that you’re working with to do the things they’re good at, don’t try to do it for them. Everybody has their skill sets and their roles; let them be.”

Gordon’s vision for Atypon puts our customers and our front-line staff at the center of things. Leaders in companies, he says, “need to serve the people that serve the customers.” Our product development and direction are driven by what publishers and societies tell us they need, and by ideas that are sparked in conversations with our community. We’re in an exciting place as an organization: many of the challenges our customers face are brand new, with new workflows for producing content and new ways of distributing, using, consuming, and selling that content.

What’s most exciting, in Gordon’s view, is that Atypon—and scholarly publishers—have “the ability to improve knowledge transfer, and in so doing, to help improve the human condition.” The world of journal issues as a finished research project has given way to “an interactive online world of discovery, a continuum of continual growth of information and knowledge” with no beginning and no end—and our job is to continually enhance that information and knowledge along the way and to get it into the right hands.

How will we do that? The key lies in understanding the many perspectives of our community members, and creatively combining our available tools to solve a wide variety of significant and impending challenges.

To give Gordon the last word: “A single pencil can write an infinite number of stories.”

Never miss a post!
Older
Google, Atypon, NIH, and the future of information discovery
Newer
After 25 years online, PNAS launches on a new trajectory with Atypon

Atypon houses more websites and content types than any other platform.